The Sultans of Swing 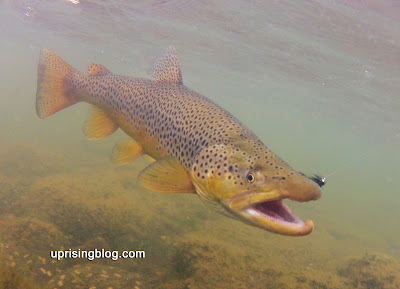 The autumnal equinox has come and gone and the days continue to grow shorter.  Fall has arrived, bringing some decent cloud cover for the first time in over two months.  Under these conditions, cracking the code is never rocket science.  In fact, the formula is quite simple:  Get on the river and start swinging streamers.
I identified a spot earlier this year that looked like great holding water for big browns.  It has been blown out most of the year but now the flows are perfect.
Today the water looked extremely fishy and the anticipation weighed heavily as I hurled my fly into the boiling cauldron.
Swing, strip, strip, WHAM!  First freaking cast.
After a long and arduous battle, the below-referenced gentleman entered my net.
After thanking my new friend and saying goodbye, I proceeded downriver while hitting every hole and tailout possible. 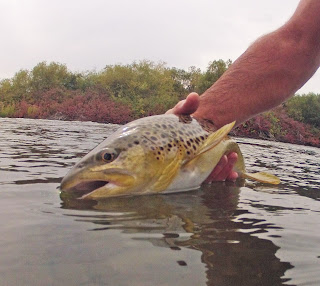 Our local rivers - big, burly behemoths all summer - become intimate stretches of pocket water in the fall.
A few more swings turned up a fat female that jumped five or six times - like a rainbow at the ranch.  She was extremely feisty, pausing only briefly after being netted for a quick photo. Moving downriver once again, I encountered over a dozen eager brown trout, most ranging in size from 12-16".
Before the day wound down, however, a couple more nice fish were released from the net. 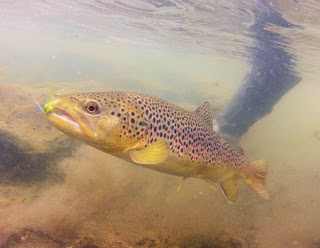 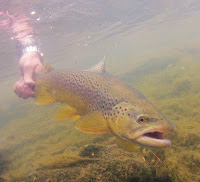 Football?  No thanks.
Posted by Brent Wilson at 8:17 PM