Something Worth Fighting For 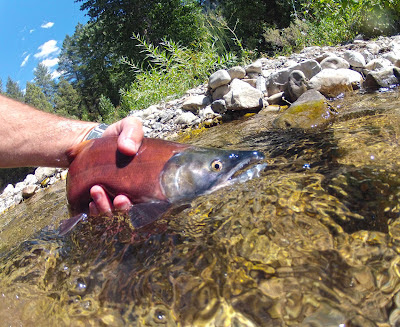 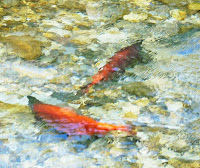 I walked along a remote mountain creek earlier this week, a fortunate observer of something miraculous - thousands of land-locked salmon making their way over formidable obstacles to complete an eons-old cycle of life.  Although these weren't sea-run salmon and the magnitude of the migration was much smaller, I couldn't help but think of Bristol Bay and the proposed Pebble Mine project.
PBS recently ran a documentary on the battle over the proposed mega mine.  As usual, they focused on the facts and did an excellent job of objectively covering the perspectives of the stakeholders. I feel much better informed on the issues.
Here's what I took away from it:
Here's What We Can Do

Let's make sure our children (and their children) have the opportunity to experience an unspoiled Bristol Bay.

Click on the photo above to check out Trout Unlimited's "Save Bristol Bay" initiative.

Join the Sportsmen's Conservation Fund Challenge and help raise money to stop the Pebble mine and protect Bristol Bay's fishing and hunting. All Challenge donations made through the end of 2012 will be doubled.

All donations will go directly to Trout Unlimited’s work to protect Bristol Bay’s fish, wildlife and renewable resources from the risks posed by Pebble.

Here is that link again.

And here is a flyer you can distribute to friends and co-workers.

Thanks.
Posted by Brent Wilson at 9:46 PM No comments: 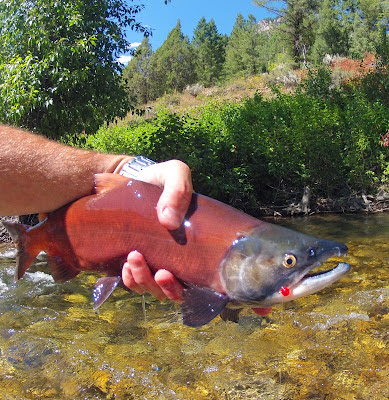 A lot of folks think Tuesdays were made for sitting behind a desk.

Nope.  Tuesdays were made for wet wading high mountain creeks.

I loaded up Uprising's mobile HQ transport and headed up to one of my favorite mountain creeks.  This time of year, the creek hosts thousands of spawning kokanee salmon - as well as a late season flavilinea mayfly hatch.  And hoppers...lots of hoppers.  While the salmon are a pleasant diversion, the real allure of this creek is hungry cutthroats that rise consistently to a well-placed dry fly. 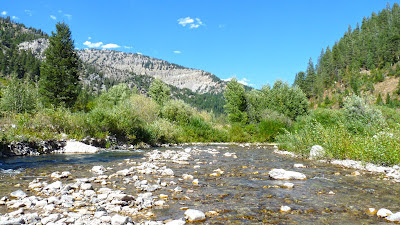 I enjoyed/endured a steep and arduous hike which involved a fair amount of bushwhacking.  It was well worth the effort. 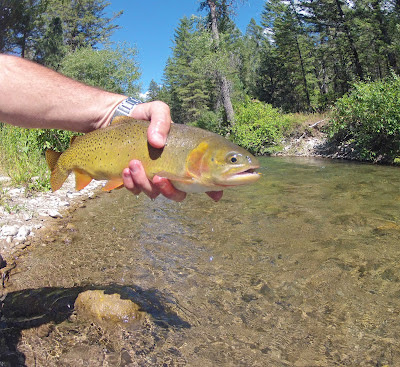 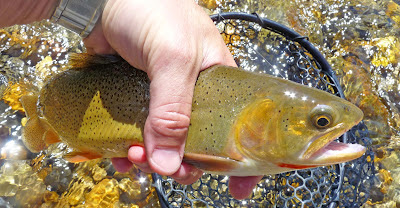 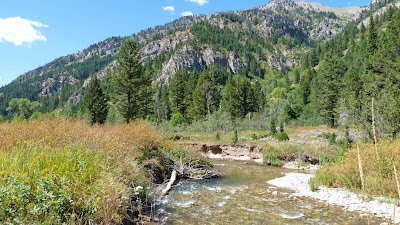 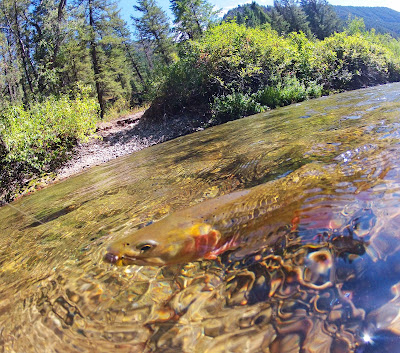 I carried two rods - one with a dry fly set-up for trout and another with a nymphing rig for kokanee.  The cutthroats responded well to a flav cripple imitation and the kokanee responded to a crimson red egg pattern. 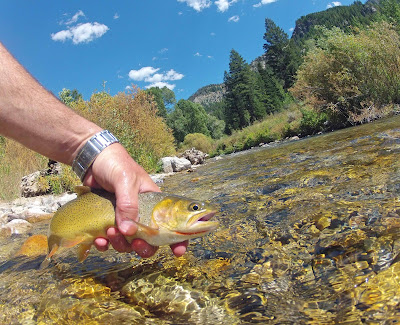 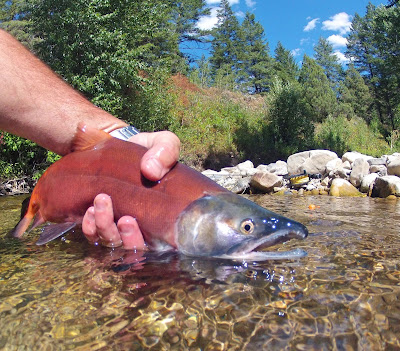 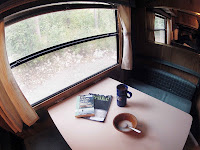 After hiking about 6 miles with a few hundred feet of elevation gain, I was pretty stoked to come back to a trailer with a fridge, bed and stove.  I had the entire campground to myself as I sat under a full moon and ate the bowl of peanut rice noodles my wife handed me on the way out the door.  I slept like the dead and had a great breakfast with a pot of black sludge coffee in the morning.
This is what life is all about.
Posted by Brent Wilson at 11:39 AM 3 comments:

This Town Needs a Good Bar with a Mechanical Bull

Back when I lived in Colorado, I used to frequent a bar that had a great mechanical bull. It's hard to beat a combination of inebriation and the potential for injury.  Those were good times.
Ironically, I now live in area that has produced some of the world's best professional rodeo bull riders, but no mechanical bulls.  Bummer.
What we do have, however, is plenty of large carp. 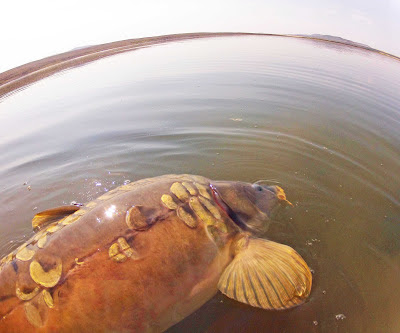 I got out on the flats this week with two local fly fishing bloggers - Chris Cutler from Many a Fish and Shane Thomas from The Fish Hunter Chronicles.  Chris and Shane are both very talented fly fishermen and they produce a remarkable amount of quality fish every week.  If you haven't checked out their blogs yet, I highly recommend you do so.
We had a good day with some solid fish.  These carp have spent all summer feeding on an abundance of scuds, large stillwater midges, damsels and leeches.  They are fat and happy.
They don't come easy this time of year and we had to work pretty hard for them. 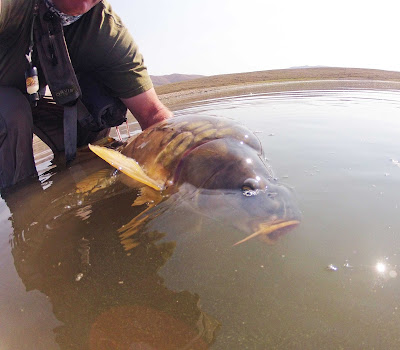 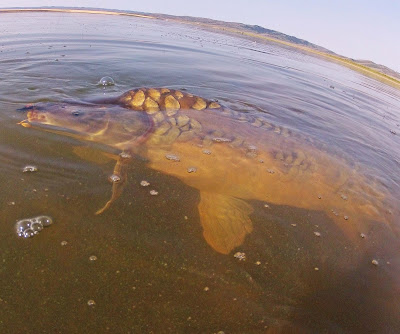 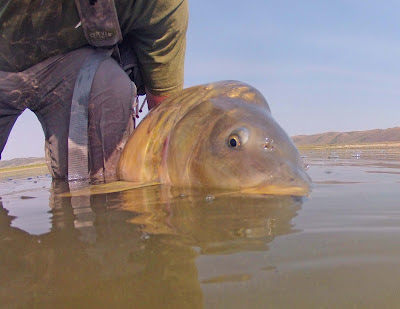 What is it about these fish that lures you into places any sensible person would avoid like the plague? 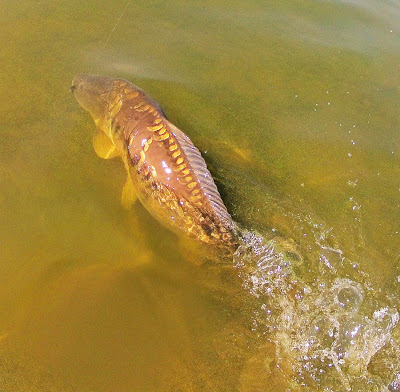 Posted by Brent Wilson at 7:39 PM No comments:

Back to the Carp Flats


I have no doubt the summer of 2012 will go on record as one of the hottest and driest in recorded history.  Our landscape here in Idaho looks brown and parched and everything around me looks like it is going to spontaneously combust.  It's no surprise there are a half dozen large wildfires across the state right now.

Given the intense heat, I have been focusing my efforts the past couple of weeks on dry fly fishing during evening hours at local spring-fed creeks where the water temperatures are a bit more trout-friendly...including the Wood Road 16 stretch of the Henry's Fork. While it has been challenging and rewarding, this heat just won't let up and it is time for me to give the trout a break.

Thus, I headed down to Blackfoot Reservoir today to visit my favorite summertime carp flat.

August carp at the reservoir are a different breed than the pre-spawn carp I fished for here in May and June.  They are spookier, more finicky, their takes are much more subtle, and they are stronger - much stronger.

Given the sheer size of the reservoir (18,000 acres), the hardest part about fishing here in August is simply locating the carp.  The lake is full of weeds and algae and the visibility is terrible. 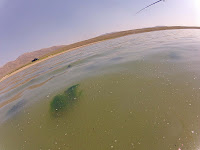 However, there is a tell-tale sign that always helps - look for floating vegetation. Apparently these carp uproot a lot of plants in their quest for the scuds and nymphs that live in them.  If you find a mat of floating weeds, there will be carp nearby.

Today I was fortunate enough to locate a school of about 20 tailing carp in shin-deep water while they worked on the landscaping. 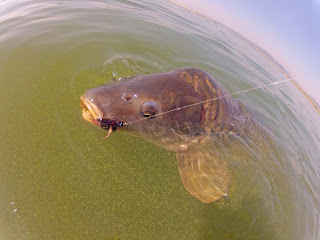 It only took a few minutes to remind myself why I love carp.  This was the most fun I've had in a long while.

I have a few friends who still aren't fly fishing for carp.  They are missing out, big time.

Today's Motto:
"If you're not down with the brown, you need to get out of town."

Posted by Brent Wilson at 2:47 PM No comments: 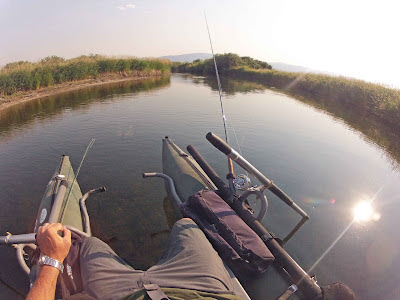 I went headhunting on a local spring creek today.  Note the downstream riseform from a large feeding trout.

After spending almost ten minutes quietly beaching my boat and getting into range for a perfect downstream presentation, I delivered a flawless cast right down his feeding lane.  After a beautiful drag-free drift, my fly was engulfed....by a 9" brook trout.

I got a couple of dozen fish today on dries and, although I had a great time, none of the fish were "blog-worthy."

Sometimes when you're up to bat, you just hit singles. 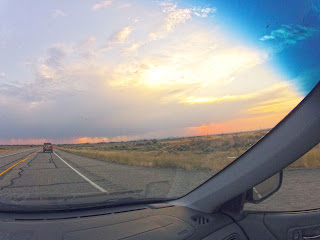 Last weekend's soiree with old friends in the park reminded me of how much I love road trips.  Seriously, is there anything that says "summer in America" more than a road trip?

Without a doubt, the soundtrack is a crucial component of any worthy excursion; so bust out some brews, Doritos and/or Funyuns and get ready for the ultimate road trip soundtrack.

Son Volt, "Windfall" - After Uncle Tupelo's unfortunate demise, Jay Farrar knocked the ball way the hell out of the park with the opening track on Son Volt's first album "Trace."  If this is not the greatest road trip song ever written, I don't know what is.

Farrar is one of the most gifted songwriters in American history.  Rock critics have been kissing Jeff Tweedy's ass for decades, but Jay's the real prodigy.  If there were any justice in the music business, he would be a billionaire.

Lucero, "Sixteen" -  This is the video for "Sixteen" but honestly there are 20 or 30 Lucero songs that should be on this list.  Just when you think Ben Nichols had used up every last hook, he comes up with a dozen more.  This is Americana and it is what Memphis is supposed to sound like.  Unlike most rock bands, these guys actually get better with each new album.  Hell yes.

Built to Spill, "Car" - A great tune from Idaho's own Built to Spill.  In 1996, I road tripped for two months straight across the western US with my friend Mike.  We listened to "There's Nothing Wrong with Love" every single day of that trip.  Sure, "Perfect From Now On" had been out for a few weeks, but our stoke on this album could not be quenched.  I liked Tree People, but I love Built to Spill.

Lee Perry, "Blackboard Jungle" - After all these years, it's still hard to beat the Upsetter.

Jawbreaker, "Save Your Generation" - Yes, it's on a major label and no, it's not "24 Hour Revenge Therapy," but it's damn good.  Shouldn't that be enough?


Beastie Boys, "So What Cha Want?" - This is as good as road tripping music gets.


The Pogues, "If I Should Fall From Grace With God," - Subaru used this song in a minvan commercial and now Shane MacGowan has a new set of teeth.  It's a close race between this record and "Rum, Sodomy and the Lash," but this one also has "Bottle of Smoke," which has some of the greatest lyrics ever written.  It is impossible to have a bad day while listening to this song.


Guided By Voices, "My Son Cool" -  In the 1990's, Guided By Voices was 'the next Beatles,' except most of America didn't give a shit.  In 1995, I drove from Gainesville, Florida to Atlanta and back again in one night so I could see Guided By Voices play before work the next morning.  It was well worth the effort.

Robert Pollard wrote hundreds of songs and many of them are gems.  This one is my favorite.

The Replacements, "Answering Machine" - I got to see the Replacements play live twice.  The first time, they were completely hammered and couldn't play their instruments.  I (reluctantly) saw them live again two years later and was blown away.  Paul Westerberg can do no wrong in my book.

Posted by Brent Wilson at 10:37 PM No comments: