The alarm clock said it was 3:40 a.m.  Normally, getting up at this hour would be a tough proposition, but not today.  Today was the day I'd reserved to fish Bucket List Destination #39...a place where large migrating brown trout and shallow-water lake trout are known to slam streamers.  A place where the fish are described in pounds, not inches.  A place deep in the heart of wolf and grizzly country where one of your primary goals is simply making it out alive.
I met up with Shane and Chris at 4:30 a.m. We packed our gear, bear bells, pepper spray and food in the truck and hit the road. Today's forecast? A nice mix of rain/sun/sleet/snow/hail and winds in excess of 30 m.p.h. Hey, at least we could expect some cloud cover, right?
We hiked roughly 14 miles total over rolling terrain in rough weather.  Was BLD39 worth all the effort?  You bet.  See below...

After the initial five mile hike in, we arrived at the outlet of a large lake where we started swinging streamers.  There were multiple pods of lakers congregated in the shallows above the outlet and Shane and Chris laid into them instantly.  These were not the lakers of legend I've read about in local folklore, but they were feisty, strong fish nonetheless.


After a few minutes, the wind began to howl and whitecaps formed on the lake. In the distance, fierce gusts snapped 100' tall trees in half like toothpicks.
Man, it was cold. 'Two wet layers under your jacket and shivering down to your toes' cold. I was starting to lose muscle memory.  Tying knots or casting with any measure of proficiency had become a challenge. I needed to move and, after we got into a few more macks, we headed downriver.
Movement was good.  It got the blood flowing and raised the core temperature.

Venturing into the river, we quickly encountered the fish we'd read about in the scrolls of local legend. 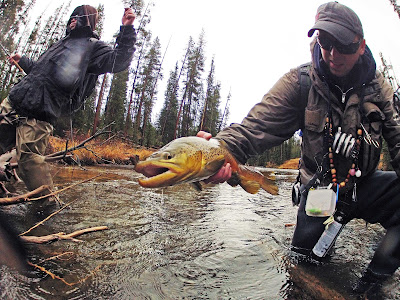 This is why we were here.  Complete solitude, desolate wilderness, and large German browns.

The fish were moving upriver in pods of 4 or 5.  You could distinguish the rust-colored males fairly easily, while the females resembled subtle gray torpedoes.

The recipe for success involved swinging a streamer in or around the pod - causing your fly to crash their little party and provoke a fight.

These fish were busy migrating from their usual lake haunts to their spawning grounds a few miles upstream. We were quite fortunate to spend some quality time with them along the way. 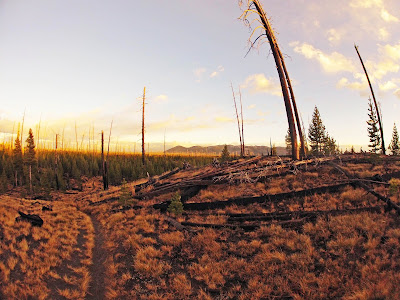 We began the trek back to the trailhead at 5:30 p.m. Distant peaks that were dry on the way in were now blanketed with snow. By 7:30 p.m., we were hiking in a state of near darkness, 15 hours after the journey began.

We'd maintained a very good pace until something dark, large and brown ahead of us on the trail caught our attention. We stopped dead in our tracks.

I pulled the safety clip off my canister of  pepper spray.

We started walking backwards slowly while repeating our mantra in the darkness.   I could feel my heart pounding in my chest.

Thirty seconds later, no movement.  A hasty headlamp retrieval from one of our packs finally revealed the truth - it was a large tree trunk that had fallen across the trail.

Funny how your mind and eyes can play tricks on you in the dark.