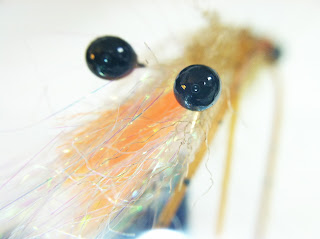 There are a lot of fly anglers (myself included) who have observed the fact that bonefish are drawn to the color orange.  Many speculate this is because an orange spot on the fly invokes the color of a pregnant shrimp's egg sac.  While this makes good sense, it is important to note that gravid shrimp do not always display orange egg sacs - they may also be pink, olive green or even gray.

An alternate theory is that the color mimics the orange spot frequently found on the large claw of a snapping shrimp - a major food staple for bonefish in Florida and throughout the Caribbean.  Apparently this is why Chico Fernandez added the orange tail to his "Bonefish Special" pattern many decades ago.

Whether it is the former or latter reason, or a combination of the two, adding some orange to your bonefish flies is typically a very good idea.
Posted by Brent Wilson at 1:01 PM