A Brief Sampling of American Hardcore in the 1980's

Let's face it, punk rock has sucked for a long time.  But hardcore punk was pretty new and exciting to me as a teenager in the early-to-mid 1980's...especially the bands coming out of Washington D.C., Boston, Austin and Chicago.  Miraculously, it all still sounds good to me after all these years.

Here is a very brief sampling of some of the best bands from that era. 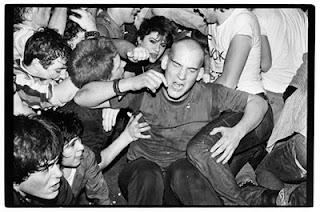 WASHINGTON, D.C. - Although there are fifty-eleven MINOR THREAT videos on the internet, they all have terrible sound quality - except this one from the 9:30 Club in 1983.


Boston produced militant straight edge bands like SS Decontrol and DYS and, at the same time, coke-snorting boozer bands like GANG GREEN.  It was all good.


However, the greatest of all time was Washington D.C.'s BAD BRAINS.  They were the best live band I have ever seen and they played both hardcore and reggae.  It was all great and there was no one else like 'em.  I was fortunate enough to see them play on this same tour:

Minneapolis had a great music scene back then and I was blown away by HUSKER DU on their "New Day Rising" tour in 1985.


Towards the mid-1980's, a few of the surviving hardcore bands evolved into a great post-hardcore genre. Chicago-based ARTICLES OF FAITH was perhaps the best band of its kind at the time:

Holy shit it was great being a teenager in the '80's.
By the way, Ian MacKaye just turned 50; hardcore is officially "over the hill."
For more information, Kill From the Heart is a great online resource which documents hundreds of 1980's hardcore bands from all over the world.  It's a pretty remarkable collection. 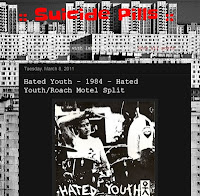 See also Suicide Pills, a great blog featuring hundreds of hardcore bands from the 1980's and beyond.

I got word this morning there is a cool documentary that is about to be released on Boston's early-80's hardcore scene called "All Ages."  It will feature SS Decontrol, DYS, Jerry's Kids, Gang Green, The Freeze, Impact Unit, The F.U.'s, Negative FX and Deep Wound.  Hell Yeah!
Posted by Brent Wilson at 9:01 AM

Email ThisBlogThis!Share to TwitterShare to FacebookShare to Pinterest
Labels: Music