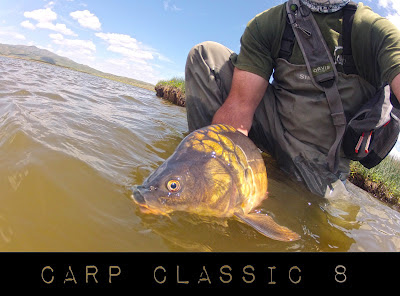 Once again, Blackfoot Reservoir was the site of the annual Carp Classic fly fishing tournament and, once again, Mother Nature came ready to party.  She brought a whole lot of hootin' and hollerin' first thing Friday morning and temperatures never ventured above 45 degrees.  It made for a day of cold, miserable fishing in the freezing rain.  Truth be told, it was probably the worst day of fishing I have ever had.  Only four teams (out of 29) put any fish on the board.
Fortunately, cold fronts tend to move through east Idaho pretty quickly this time of year and Day 2 was a different story altogether. In fact, it was warmer by 9:30 a.m. on Saturday than it was all day Friday.  As the sun warmed up the flats, the bite came on at 10:00 a.m.  It was like somebody flipped a light switch.  No action all morning...and then it was "go time."
This year there were 29 teams and, like previous years, each team had three anglers. I was teamed up with two guys from Missoula - John and Steve.  Although John and Steve have been fly fishermen for over 40 years each, this was their first time fly fishing for carp. They got many takes but most fish were lost to the "trout set" reflex.


However, Steve was able to land his first carp on the fly on Saturday and both anglers announced they now have "carp fever."
It was really great to see guys who have been fly fishing for many decades take on a new challenge and become completely stoked.  They were totally awesome guys to fish with and we've made plans to get together again to fish up in Missoula.  Of course, they plan on coming back again for next year's tournament as well.
Although I was fortunate to land good numbers of fish, none of them were hogs...and the Carp Classic tournament is all about the hogs.  In other words, the largest fish per angler and the total weight for the team's three largest fish is what counts.  In these types of tournaments, catching one fish - the right fish - is enough to win the tournament. 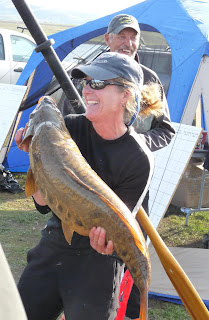 Such is the case with Terrie from team Mikey's Ho's.  She landed a phenomenal 27 pound slab and took the win in the women's division and the largest fish for Day 2.  Damn that was a great fish.
The vibe was totally great and everyone who participated had a great attitude.  I have never seen so many happy dogs in one place having a blast together.

Mad props and thanks are in order to Brooks Montgomery, Kenly Bitton, Travis Morris and everyone else involved for a great time.  I had a blast.
Posted by Brent Wilson at 8:29 PM