Some Days You Eat The Bear 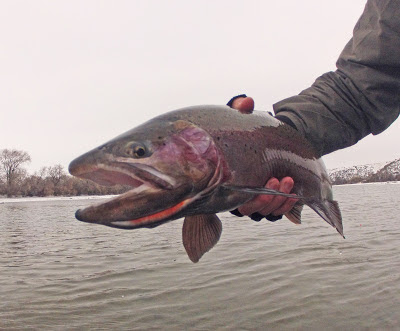 East Idaho's been hovering around or below zero degrees for two weeks now and I've been trapped inside the house, fending off a nasty respiratory infection.  Cough medicine and antibiotics have staved off the infection, but not the cabin fever.
My head has been in a bad place since Christmas.  I really needed some time on the water today and it felt great to get out.
I'll admit I get pretty superstitious about the first fish I catch each year - as if it is an indication of what's to follow thereafter.  I dread the idea of foul-hooking a sucker on my first outing of the year.  Fortunately, the first fish this year was the above-referenced cuttbow.  He was a fine specimen and, as a hybrid, was strong as a bull.  Seriously, it took me about 15 minutes to get him to the net. 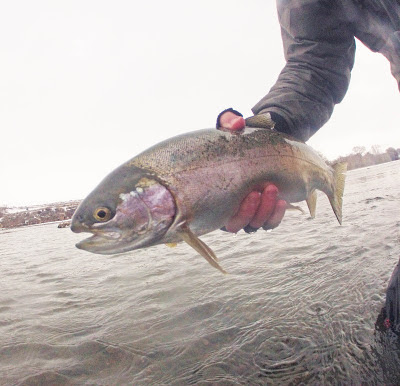 Even with a short window of fishing time, it was a good day to get out - with temps in the high 20's.

I am still jonesing for a trip somewhere warm, however.

They say a leisure class exists at both ends of the American economic spectrum.  Somehow, despite my best efforts, I've found myself stuck in the middle - with neither enough cash nor enough time to explore even a fraction of the places I've set aside for next year. 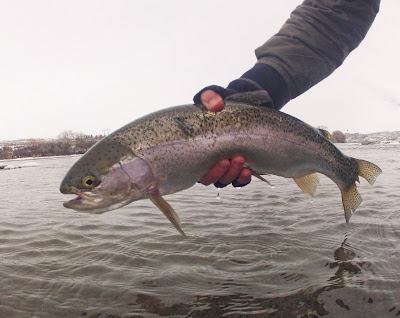 I need to feel warm water under a bright sun.  I need to explore some new territory.

Still, today's outing did wonders for my spirits.

Today, I ate the bear.