Thought I'd check in with some initial photos of the fingers post-frostbite.  The swelling has gone down significantly but the blisters are still out in full force.  Feeling and color have come back to most areas in both hands, but my left ring finger, left middle fingertip and right pinky are still discolored and inflated.  These are the areas to watch out for over the coming days.
The good news is that it looks like I am going to be okay, despite my foolish behavior last week.

It takes some time for that "textbook frostbite look" to set in.  Apparently this is an example of what I have to look forward to in about 10 days. 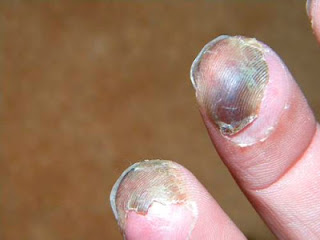 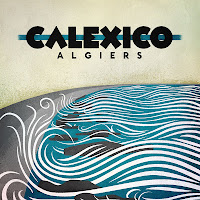 I spent the afternoon at the vice while listening to Calexico's latest album "Algiers."  I've been listening to the Tuscon-based band for about 10 years now and they keep getting better with age.  While their earlier works have been heavily influenced by mariachi/Tejano music,  "Algiers" features a lot of underlying country, folk and rock themes.  They've certainly evolved as artists over the years.  Not to worry, though - "No Te Vayas" offers up some old fashioned Mexican melody just like the good old days.

It amazes me the same nation that produced the McRib sandwich, multiple formulaic teen pop stars and "Honey, I Shrunk the Kids" can also produce something as nuanced, rich and wonderful as Calexico.  There is hope for us after all.

Listening to "Algiers" is like sitting on a porch in a rocking chair on a summer evening while smoking a fine cigar.  You just take it all in and let it resonate - and it is beautiful.
I still think "Aerocalexico" is their strongest work, but this one is remarkable nonetheless.  I highly recommend you check them out if you haven't already done so.
Here are a couple of my favorites from "Algiers":