For those keeping score, my fishing schedule this month has been sacked by back-to-back bouts with: 1) respiratory infection, 2) the stomach flu and 3) frostbite. Fortunately, this week included much-improved digits, a rare warm spell (with temps into the '40's) and a few good trout.

"It's Better to be Good Than Lucky, but Aim for Both":  I hooked the above-referenced brown trout while swinging a small streamer through a run. About a minute into our tug-of-war, the fish spit the hook, then immediately re-hooked itself.  I landed the fish and we took some photos before releasing it.  Luck for the win (with a technical DQ).
"When Fish Get Too Smart, Throw a Little 'Dumb' at Them": Yesterday Shane, Kyle and I fished some local water that receives an intense amount of pressure. I've done well here in the past by focusing on appropriate small baetis and midge life cycle patterns. However, it became apparent yesterday these fish have grown too wise for this approach. Shane, on the other hand, tied on a San Juan Worm and started slaying them instantly. Many of his worm-gulpers were good fish, too.

Being the stubborn fool that I am, I continued fishing midges and blue wing imitations. It was, after all, "blue wing weather" and there were a few bugs in the surface film. After another hour or so of watching Shane and Kyle slay large trout with a piece of red chenille while my patterns were ignored, I finally asked Shane for one of his flies and got a bend in the rod.
Lesson learned - time to start tying up some redneck worms.  Now, if I can just find a good online tying tutorial...

"Wade Softly and Carry a Big Net":  It's time for me to get a good wide net with a long handle.  Trying to haul a good fish over a ledge, around some boulders and into a net shouldn't be a two man job.  In some instances, there are safety issues with shelf ice, balance and footing.
I may just break down and purchase one of those sweet (but pricey) Nomad mid-length jobbers.
"The Grass Frequently is Greener":  Rivers are complex.  Even if Spot A is not fishing well, it doesn't mean Spot B downstream can't be white hot.  Such was the case yesterday.  Unfortunately, we had only a few minutes in the day left to fish when we ventured to Spot B.  Nonetheless, it paid dividends - another good brown. 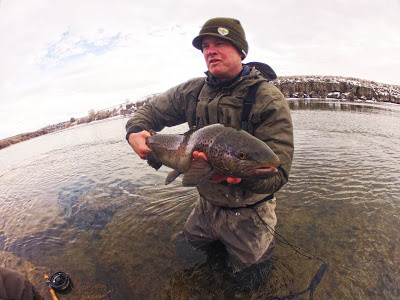 Things are starting to look pretty rosy around here.